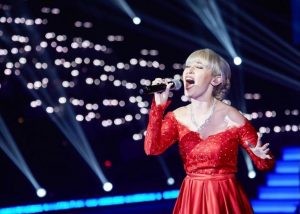 After months of travelling from state to state and six rounds of gruelling auditions fuelled by the drive to pursue a life-long dream, Kayleigh Marven was accepted to play the understudy of Christine in Opera Australia’s production of Phantom of the Opera.

She’s dreamt of singing at the Sydney Opera House – and being a Disney princess – since childhood.

Performing from the age of eight, Kayleigh, 20, has always had a passion for singing and theatre, inspired by the music of Disney, which she still adores in adulthood.

Every shelf in her bedroom showcases an impressive array of Disney collectables.

“I went to Disneyland in Paris as a little girl and refused to wear anything other than my Snow White dress.

“I always sang as a kid. My mum would put Disney songs on in the car,” she laughs, admitting she was annoyed if anyone tried to sing over the top of her.

Kayleigh has since performed in various productions including Peter Pan Junior as Tinkerbell, Oliver the Musical as Bet, The Wizard of Oz as Dorothy Gale, and Pirates of Penzance, in which she played Mabel’s sister Isabel.

“Mabel’s sisters Edith, Kate and Isabel were show standouts and demanded much of the attention on stage,” wrote award-winning playwright and producer Elodie Boal in her 2020 review of the show.

But Kayleigh admits The Wizard of Oz will always hold a special place in her heart.

“I was 15, I was Dorothy and it was my first big role and that show was really what started everything for me because I just loved it.”

Her family dog Snoopy was also lucky enough to score a spot on stage as Dorothy’s dog Toto.

“My family’s always been extremely supportive,” she says.