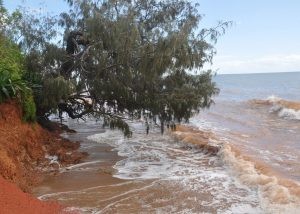 Moreton Bay residents who live near the water are being urged to prepare for localised flooding, with king tides expected to hit the coastline as a result of Tropical Cyclone Seth.

The region has already started to see some impacts from the cyclone, with water pummeling the Red Cliffs, seeping over roads and lapping bridges in the Scarborough and Redcliffe regions.

A Bureau of Meteorology Spokesman said low lying areas of the peninsula, and the surrounding islands, will experience the worst of the tides early this week.

“The combination of spring tides and the impact of Tropical Cyclone Seth will potentially see some low-lying coastal regions inundated over the coming days,” the spokesman said.

“Higher than normal tides will be seen across the region from Monday to Wednesday, easing more on Thursday.”

Three decades of helping others