Glitz and Glamour on the Peninsula

The Peninsula has had a taste of Hollywood in recent weeks, with a movie chronicling the lives of the Bee Gees due out next month and the producers of the Dwayne Johnson series Young Rock choosing Scarborough as a location for filming. The excitement comes as Redcliffe’s Bee Gees Way reopened this week, just in time for summer.

Bee Gees Way was closed in October for a $244,000 upgrade of its audio, visual and lighting infrastructure.

Night Fever on the playlist The Bee Gees: How Can You Mend a Broken Heart is a feature-length documentary that chronicles the rise of the iconic Gibb brothers – Barry, Maurice and Robin – who grew up in Redcliffe and played their first gig in the Redcliffe Town Hall.

Speaking on ABC radio, Barry Gibb said his time in Redcliffe was indelibly etched in his memory.

“You forget some things in life, but not Redcliffe – fishing on the old pier, watching the sharks at night,” Gibb said.

“Living among the fantastic wildlife like snakes and spiders – it was quite an experience for us because we had never seen any of those things.

“It was very tropical, very much paradise and we just fell in love.

“Those years I would say, as four brothers, were the best years of our lives.” 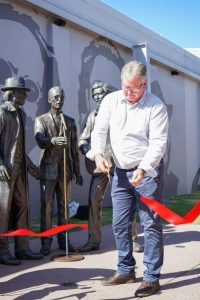 The Bee Gees: How Can You Mend a Broken Heartis screening at Hoyts Redcliffe from December 3.

New album on the way

Gibb’s new album, Greenfields: The Gibb Brothers Songbook, Vol 1, is due for release in January

Continuing the region’s reputation for being on the world stage, Scarborough’s Tempest Restaurant and Teppanyaki was the second Moreton Bay Region setting chosen as a filming location for Dwayne “The Rock” Johnson’s Young Rock series after Strathpine had its turn in the spotlight.

Mayor Flannery said it was an honour to host the Young Rockfilming.

“I want Moreton Bay to earn a reputation as the easiest place to film in South East Queensland,” he said.

“The economic benefit of having 100 crew in our region for both days was great and I look forward to them coming back for a third.”