In 2020, for only the third time in the event’s history — and the first time since the Second World War — Brisbane’s annual Ekka isn’t going ahead in-person. But, that doesn’t mean that it isn’t going ahead at all. While the physical Ekka was cancelled for this year back when the city was going into COVID-19 lockdowns, and the annual public holiday has even been moved, the show will live on as an online event. So, your August plans can still involve showbags, baby animals, Bertie Beetles and strawberry sundaes.

Ekka Online runs from Friday, August 7–Sunday, August 16 — and, in its virtual format, that means ten days of fun via digital means. Courtesy of ten online channels, you’ll be able to watch streamed live music, peer at cute critters in the baby animal nursery, get to know Queensland’s dog and cat community, and check out a heap of baking and cooking demonstrations. There’ll also be fireworks on Thursday, August 6, to get things started, because it wouldn’t be the Ekka without them.

Of course, there’s more going on than that — including when it comes to two Ekka staples. Sure, you can’t crash dodgems and throw a ball in a clown’s mouth for a prize this year; however you will be able to stock up on showbags and feast on ice cream.

First, the showbags. Around 400 different types will be available during the first-ever virtual Ekka marketplace. The online buying frenzy will also include award-winning medal winners from the Royal Queensland Food and Wine Show (RQFWS) competitions, retailers who’ve been a part of the show for years, and local makers and creators.

Now, the tasty part of proceedings: the strawberry sundaes. They’ll be available physically, thanks to a number of drive-thru pop-ups at the Showgrounds, on King Street and at other sites around town — with dates and locations yet to be announced. And, as well as sundaes, the pop-ups will be selling dagwood dogs as well.

Plus, if you’re keen on more than a few of the iconic desserts — 20 or 100 of them, that you whip up yourself at home — you can buy DIY sundae-making kits, too. You’ll receive all the ingredients that are used to assemble the sundaes at the Ekka, and you’ll also be doing a good deed by supporting medical research via The Prince Charles Hospital Foundation for The Common Good. 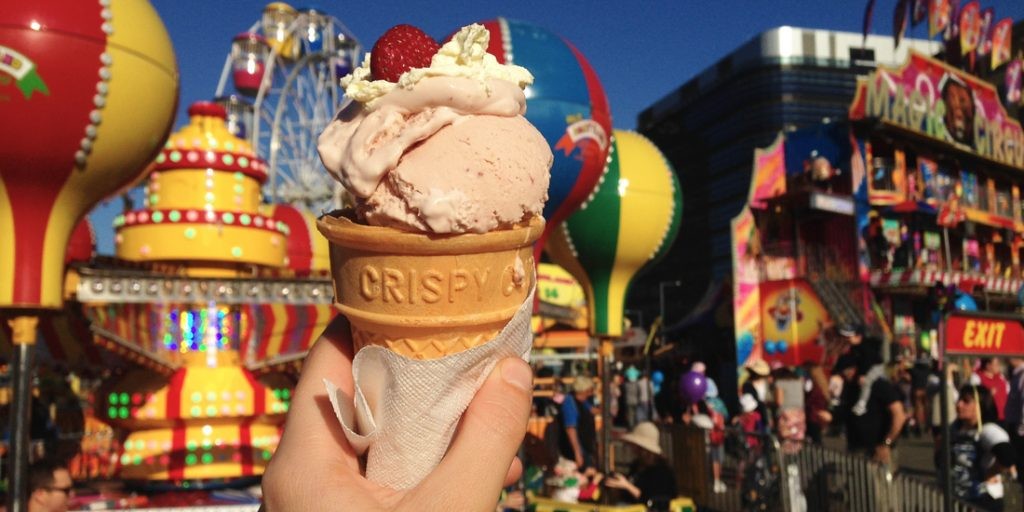