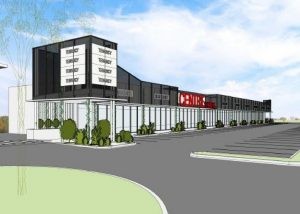 The Comiskey family has revealed plans for a $20 million hotel and retail development at Dakabin, which are presently being considered by Moreton Bay Regional Council.

“It’s an exciting project for us. We’ve been looking at it for 10 years and thought it would be a nice area for a project like this,” Mr Comiskey says.

The developer lodged a material change of use application with Council on August 17, after purchasing the site more than two months ago. At present, there’s a house and sheds on the block.

The plans include a 2000sqm licensed hotel and shopping centre with a mix of retail and commercial tenants, including a bottle shop. There would also be a service station and two drive-thru fast-food outlets.

The development would not include a supermarket, as there is already a Woolworths on the opposite corner.

Mr Comiskey says the hotel will be the same quality as the Comiskey Group’s Sandstone Point and Eatons Hill Hotels, but smaller and with its own theme.

It will be owned and operated by the family, with a focus on attracting families in the surrounding growing communities.

Design elements include planter boxes off the roof, a fire fit in the centre of the restaurant.

“It will feel more like an upmarket restaurant than a hotel,” he says.

“I’ve been driving past it for 10 years and thought it would be a nice place for a hotel. It’s elevated and has a nice outlook, and 24,000 cars drive past each day.”