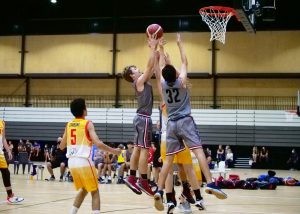 It will cater for at least 11 different sports and activities ranging from basketball and netball to wheelchair sports, martial arts and rugby.

It has already hosted a number of events including the Under 16 Queensland Basketball Championships. The state taekwondo titles will be under its roof on Sunday.

“While SPSC might be close to the biggest sports complex in Queensland by size, I believe it could be the biggest by sheer participation numbers too,” he says.

“Nearly 10,000 people participate in sport at SPSC on a weekly basis, and we cater for at least 5000 students through school sports activity every year.

“We have everything from AFL, cricket, hockey, football, rugby league, outdoor netball, gymnastics and the upgraded indoor centre and rugby union and touch football clubhouse.

“I expect those numbers to grow again with the completion of this work.”

Councillor Cath Tonks (Div 9) hopes the centre may be used by teams for the 2032 Olympic Games, if Brisbane secures the hosting rights.

“We’ve had interest in the Indoor Centre during the 2022 FIBA Women’s Basketball World Cup, which is being hosted in Australia,” she says.

“We’re also adding the new Queensland Centre of Excellence for Women’s Football in time for the 2023 FIFA Women’s World Cup.

“I hope it continues to encourage more and more people take up one of the many sports on offer right here.”