The Mango Hill State School Art Auction went off with a bang! The auction started off with a piece from Prep T that was titled ‘Flower of the Sun’ Each student had a turn at painting the background using a textured roller and then continued using their open little hands and fingers to create the colourful sunflower and leaves. 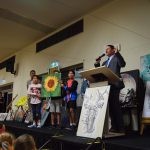 One of the Families of the school donated a piece of Jeff Horn Memorabilia including a signed boxing glove in a frame which also featured a plaque down the bottom. This piece of memorabilia was auctioned off for over $1,500. 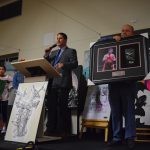 The night ended off with three artworks that were created by the school’s artist and his final piece was auctioned off for over $450. 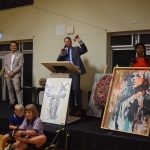 The night was a great success with raising several thousand for charity.