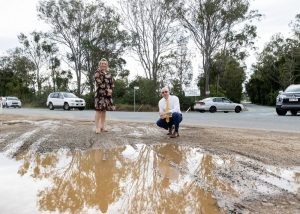 The $12.9 million upgrade of Henry and Dohles Rocks roads at Griffin will start in the coming months, with the project now out to tender and due to be finished early next year.

The upgrade will be funded by Moreton Bay Regional Council (over two financial years), with a $4 million contribution from the Federal Government.

Federal Member for Petrie Luke Howarth and Councillor Jodie Shipway (Div 4) are pleased to see the project progressing and said it was needed to improve safety and provide a route motorists could rely on in wet weather.

The flood-prone road is regularly closed after sustained heavy rain.

“It will be raised higher, flood-proofed, still allow wildlife in the local creek and environment to be protected,” Mr Howarth says.

“The LED lighting that will be installed won’t attract wildlife like bats, possums, turtles etc and is meant to minimise impact on the environment.”

The upgrade will extend from about 300m south of Brays Rd on Henry Road to about 50m east of Silvereye Drive/Bettson Blvd on Dohles Rocks Rd.

It will include reconstruction, widening and major improvements to flood immunity, realignment and signalisation of the intersection of Henry and Dohles Rocks roads, including additional turn lanes on all approaches and a signalised pedestrian crossing.

There will also be a new intersection on Henry Rd for the future Griffin Sports Complex and new pedestrian and cyclist facilities to improve connectivity and accessibility to public transport and parks.

“Working with council enables us to get the road built quickly and construction should start in September,” Mr Howarth says.

Cr Shipway says the upgrade will be lasting no matter what connector roads are built in the area in the coming years.

“It’s either going to be a service road for the Moreton Connector or it will be a part of the bigger project but it won’t be sacrificial because that’s what we were most concerned about … wasting Federal funds and council funds,” she says.

Do your bit to help a small business