Wood chop events are carved into the history of the Redcliffe Show, but they have evolved with technology and the popularity of high-energy timber sports. 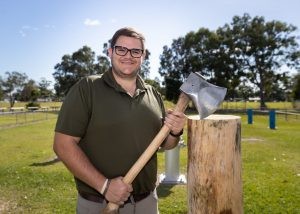 Co-Head Steward Tom Wilkinson said the show’s woodchopping program was one of the biggest outside of a Royal Show.

Mr Wilkinson said about 70 competitors would battle it out, including 10 women and children, and some of these are high-profile interstate competitors from the Stihl Series.

“A lot of the guys that are coming are world champions,” he said.

These include Mitch Argent from Blackbutt, who is the current world title holder in the standing block. He has won this for three consecutive years, and only one of four who have achieved this.

Redcliffe’s Jamie Head, the other Head Steward for the wood chop arena, will also compete and is the current world title holder in the double-handed saw.

Victoria’s Laurence O’Toole, of the well-known woodchopping O’Toole family, has held many world titles include the underhand chop which he has won 11 times at the Royal Easter Show.

“The best of the best, you can get in Australia at the moment, will be here,” Mr Wilkinson said.

“The hot saw event is a pretty big drawcard. We were the first show in Queensland to run a hot saw event and this will be the second year we’ve done it.”

Spectators will also have the chance to watch the springboard event, as seen in the Stihl Timber sports Series.